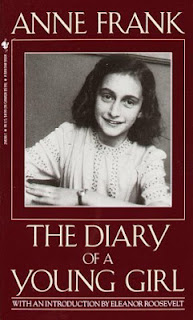 How could I not include a book written by a 13 year old girl who lived in The Netherlands during the war? She had a passion for reading and kept a diary. A wonderful, human diary full of quirky anecdotes, mature contemplation, childish observations and everything in between.
Anne dreamed of being a published writer. She was living in hiding, hoping to evade German soldiers who would kill her and her family – simply for being Jewish. Her life was confined to a few small rooms, shared with friends and family members. But her spirit soared above the steep roofs of Amsterdam’s houses. Her mind twirled with the church bells of the nearby Westerkerk and floated along with the wind blown clouds she could barely see.

For two years, until their whereabouts were betrayed to the Gestapo, they and another family lived cloistered in the “Secret Annex” of an old office building. Cut off from the outside world, they faced hunger, boredom, the constant cruelties of living in confined quarters, and the ever-present threat of discovery and death.
Discovered in the attic in which she spent the last years of her life, Anne Frank’s remarkable diary has since become a world classic—a powerful reminder of the horrors of war and an eloquent testament to the human spirit.