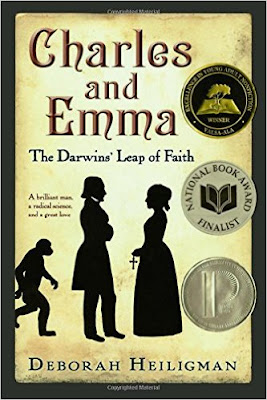 I recently spotted this hardcover and bought it at a literacy conference. I had seen reviews of it and the title appealed to me. I was curious. I have never read The Origin of Species but wanted to learn more about the man who wrote that groundbreaking book.
I was blown away while reading Charles and Emma. I kept thinking ‘what an amazing amount of research this author has done!’ and ‘how did she make all of these facts and quotes so readable?’
Charles Darwin was a young man in Victorian England when he went on a sea voyage around the world on the ship called the HMS Beagle. While visiting islands in South America and beyond, he collected specimens of plants and animals, recording information and labeling each item.
Back in England, after 5 years, he and other scientists studied these artifacts in detail. They had been raised in the solid belief that God had created all things and that these things did not ever change. However, studying birds collected on the Galapagos Islands, they noticed minute differences in the beaks. Having observed earthquakes and volcanic eruptions, Darwin’s brain slowly made him realize that not all things were as constant as had been believed. He realized that changes, that evolution, were at work to allow all species the benefit of the fittest; to allow them to survive and adapt to their environment. He also realized that the earth was much older than the few thousand years the church said it was.
In Charles and Emma, I learned how scared Darwin himself was of his realizations. How he felt the need to document and proof his beliefs before sharing them with anyone. The book focuses on his personal life  with his beloved wife Emma. Emma was extremely religious and worried about her husband’s findings. Yet, even though she never shared his strong feelings, she helped and supported him. Her faith gave Charles a lot to think about as he worked on a theory that continues to spark intense debate even today. He was a thoughtful and kind man, supported by a loving, liberal family. This book is a unique glimpse into their world and into households of Victorian England. A fascinating read, no matter which side of the fence you are on. And look at all the awards it won! It is, in my opinion, one of those rare books that is both for YA (young adult) and adult – a true ‘anybody’ book.
‘Deborah Heiligman’s biography of Charles Darwin is a thought-provoking account of the man behind evolutionary theory: how his personal life affected his work and vice versa. The end result is an engaging exploration of history, science, and religion for young readers’.