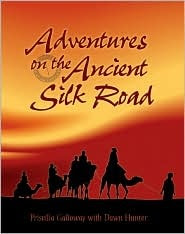 This is a gripping account of three dramatic journeys that changed the course of history.

The fabled Silk Road conjures up sights, smells and sounds of faraway lands. But traveling the Silk Road took years, and those who set out encountered bandits, starvation and treacherous storms.

Chinese Buddhist Xuanzang, whose 16-year journey from China to India and back (629-645 AD) is the only source we have for huge chunks of the history and geography of this time. His successful search for Buddhist scriptures changed the course of two great nations.

Genghis Khan, bred from infancy to be a warrior, brought the Mongol clans together. He established the greatest empire the world had seen, which ruled the Silk Road from 1201 to 1227.

And the Italian merchant Marco Polo who journeyed through China from 1271 to 1295. He changed the way Europe saw the world, and his book even inspired Columbus to sail west across the Atlantic Ocean in search of China.

Beautiful photographs and art depicting the ancient routes and peoples bring the stories to life. Maps, sidebars and an afterword that updates the story of the Silk Road are also featured. This is one of those books that is labeled YA or children’s but really is an ‘everybody’ book.