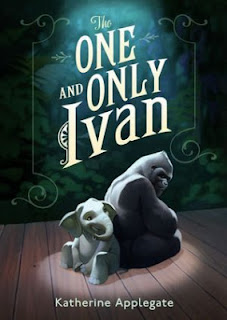 The One and Only Ivan, by Katherine Applegate

Sometimes I am not sure what motivated a Newbery jury in selecting a particular book. Daunting as their task must be, Newbery novels have been all over the map for me – from books I adore to books in which I just don’t see the merits. But The One and Only Ivan is a delicious, unique, lovely written story. Published by HarperCollins in 2012, this is the 2013 Newbery Award winning novel.

If gorillas had a human voice, this one rings true as a large primate living in captivity. Ivan is an easygoing gorilla. Living at the Exit 8 Big Top Mall and Video Arcade, he has grown accustomed to humans watching him through the glass walls of his domain. He rarely misses his life in the jungle. In fact, he hardly ever thinks about it at all since he has successfully blocked out the dark events of his past. He has accepted his fate, even if he’d rather be anywhere else.

Ivan’ friends are Stella, an elderly elephant, and Bob, a stray dog. Bob is a wonderful character, stray by choice. Stella, however, has an elephant’s memory and she has not forgotten how life in the wild was. She has not forgotten nor accepted humans’ brutalities. In between the circus acts in which both Ivan and Stella have to earn their keep, Ivan thinks about art and how to capture the taste of a mango or the sound of leaves with color and a well-placed line.

Then Ruby arrived, a baby elephant taken from her family. She makes Ivan see their home—and his own art—through new eyes. When Ruby arrives, change comes with her, and it’s up to Ivan to make it a change for the better.

Katherine Applegate blends humor and poignancy to create Ivan’s unforgettable first-person narration in a story of friendship, art, and hope.
Beautifully and gently told, this story can lead to much contemplation of how humans hunt, and keep animals in captivity. I’ll never again look a zoo gorilla in the eyes without wondering what’s going on behind that high forehead.

Check out the current issue of Canadian Teacher Magazine for my interview with award winning illustrator Ron Lightburn.