So what is it about some of these Christmas songs that we happily belt out each year?
While Thomas’ Snowsuit (Robert Munsch) gets banned because the kid says no-no-no to his teacher, we keep cheering on those two-faced reindeer who exclude one of their own….
Why didn’t Santa or Mrs. Claus call those reindeer on their behaviour when they didn’t let poor Rudolph join in any of their games, just because he looked different?
And then, suddenly, when Santa finds a use for him, they all want to be friends. Well, I would have said ‘tough gingerbread, where were you when I needed a friend?’

And that fun sleigh ride through the snow is debatable too, when you actually listen to the words:
The horse was lean and lank
Misfortune seemed his lot
We got into a drifted bank,
And then we got upsot.

Oh, what fun… And what is ‘upsot’anyway? Is it just ‘upset’ that didn’t rhyme? Or some old word like ‘hark’? I had to google that one. It means ‘listen’, as in ‘hark, children!’

So, in this hap-happiest time of the year, when we’re finally all gay, I’d recommend curling up with a well written book rather than a questionable song. Picture books, of course, are the best. Not just to read for yourself but to share with loved ones by the fire when you watch those chestnuts pop.

Why not make a trip to the library, just before it closes for Christmas – it’s still the best free thing around – and check out these wonderful, timeless stories:

I Stood Upon A Mountain, Aileen Fisher, ISBN 0-690-03977-8
This gentle story puts to rest the debate of where we all came from. Creation? Explosion? It incorporates first nations ideas and other explanations of life on earth in a beautiful, simple and totally acceptable manner.

Another simple, timeless story is The Christmas Book by Dick Bruna, ISBN 0-416-24170-0. Likely it is out of print but try to find one in the library. We all know Bruna from the Miffy books. His Christmas story is plain and simple: a star, some shepards, a manger, a mother, a baby. The essence of a birth in Bethlehem.

The Christmas Candle, Richard Paul Evans, ISBN 0-439-15837-0, with unbelievably beautiful paintings by Jacob Collins. This story reads like an old folk tale. It is about the magic of seeing every day things in a new light, enriching not only the lives of those around you, but your own at the same time.

Island Santa, Sheryl McFarlane, Sheena Lott, ISBN 9-780988-053601 is a beautiful story based on the real Santa Ship that visits the Gulf Islands in BC where I live. McFarlane combined this with the real story of Jeneece Edroff who fundraised to make a home for families of sick children a reality near Victoria’s General Hospital.
Check out: https://islandkidsfirst.com/jeneece-place/

When Santa Was a Baby, Linda Bailey, ISBN 978-1770495562
What kind of baby was Santa? And what was he like as a child and a teenager? In this story it becomes clear that Santa knew his own mind from a very young age. From his fondness for the colour red, to his interest in chimneys, to his habit of giving his toys away . . . Santa was unusual right from the start. Luckily he had doting parents who supported him through every eccentricity, whether they understood or not. A warm, funny story about an odd boy who succeeds.

Thank You, Santa by Margaret Wild, ISBN 0-590-45806-X
A correspondence between Samantha and Santa, throughout the year. Santa is thrilled when someone actually writes him a thank you card after Christmas, rather than just always letters of what everyone wants before Christmas. A nice twist.

And finally The True Story of Santa Claus, by Eric Walters and his daughter Christina, ISBN 1-894601-11-4 This is the account of how Mrs. Claus is the real hero behind all the hard work at the North Pole. While her husband gained weight and was down to one day per year of work, it was her slaving away making toys and meals, that kept the whole Santa thing going. A fun read for the whole family, especially exhausted moms.

Remember to 1] support your local bookseller, but 2] you can order from www.betterworldbooks.com 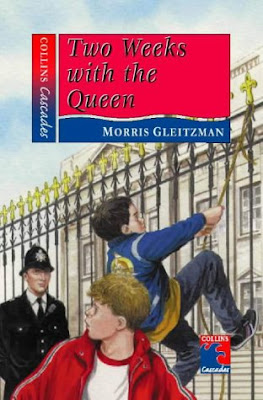 “Dear Your Majesty the Queen,
I need to speak to you urgently about my brother Luke. He’s got cancer and the doctors in Australia are being really slack. If I could borrow your top doctor for a few days I know he/she would fix things in no time. Of course Mum and Dad would pay his/her fares even if it meant selling the car or getting a loan. Please contact me at the above address urgently.
Yours sincerely,
Colin Mudford.
P.S.
This is not a hoax.
Ring the above number and Aunty Iris will tell you.
Hang up if a man answers.“
This is how Two Weeks With The Queen starts.
I like Morris Gleitzman’s books for their tongue-in-cheek humor. But when I finished this book I was struck by the fact that he dealt with difficult issues: homosexuality, cancer and more – in such a wonderful, lighthearted manner.
This is a humorous but deeply moving story about Colin, who refuses to believe that his younger brother is dying of cancer. Colin takes matters in his own hands and decides to go to the top for help, who better than the all mighty Queen? Colin’s efforts to reach Her Majesty are hilarious, surprising and doomed to failure. But even if Colin can’t find a cure for cancer, he does find a way to help some of his new friends, as well as discovering the best thing he can do for Luke and his family. A tender, tough story that could be serve as a read-aloud to discussion the issues together.
Author website: http://www.morrisgleitzman.com/
Listen to a chapter here: http://www.morrisgleitzman.com/books/fst_intro_2wks.html
Lesson Plan: http://www.teacher-of-english.com/two-weeks-with-the-queen-teaching-resources-358.html