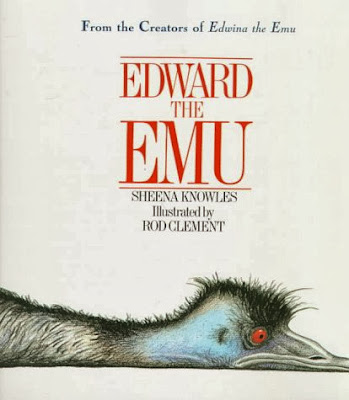 “Edward the emu was sick of the zoo,
There was nowhere to go, there was nothing to do,
And compared to the seals that lived right next door,
Well being an emu was frankly a bore….”

Tired of his life as an emu, Edward decides to try being something else for a change. He tries swimming with the seals. He spends a day lounging with the lions. He even does a stint slithering with the snakes.

But Edward soon discovers that being an emu may be the best thing after all. And so he returns to his pen, only to find a big surprise awaiting him. .
I love Sheena Knowles’ rhyming text but Rod Clement’s amazing illustrations really make this a fabulous picture book. Right now I am in Australia and see this book everywhere. I’ve used it for years with both kids and teachers.

The fun continues with Edwina the Emu by the same two creators.