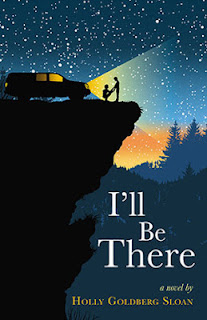 I was given a review copy of this book at a literacy conference. Finally had a chance to read the 393 page novel.
Sloan writes movie scripts, including Made in America and The Big Green. It shows. Her debut novel, I’ll Be There, reads like a movie. I couldn’t put the book down because it is so well written. From several different view points – boy, girl, young adults, adults. It’s a wild ride of action, intrigue, emotions. A story of families and belonging.
A good story. Even though.. I kept thinking, in the back of my mind, this is TOO far fetched, this would never happen!
There are too many unbelievable, implausible, things that happen in this book. Two boys, abducted by their father, living on the road for ten years. They move at his whim, eat out of dumpsters. Then the oldest boy meets a girl from a warm, loving home and things change for him. But he still stays with his younger brother as the father takes them to Utah, tries to shoot them. They survive in the wilderness, loose each other, find each other and their surrogate family again. They live, love and learn.
It’s an intriguing story. It pulls you in.
Toward the end, the author goes overboard by describing what happens to the rest of the lives of several, fleeting characters. Should have stuck to the main story.
But if you can buy into all the improbable events, it’s great. Even if you don’t buy it, it’s still a good read.