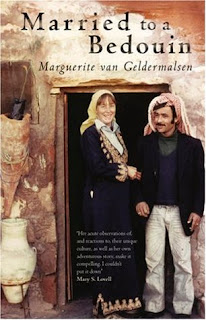 I ‘discovered’ this nonfiction novel while visiting the Middle East. It is a good, interesting read. But mostly the story stayed with me because of its uniqueness. How many of us travel when we are first out of school and want to see the world? But how many of us actually end up marrying someone from a different culture and spending the rest of your life living in a cave in Petra?! ‘Where you staying?’ the Bedouin asked the New Zealand girl visiting his town. ‘Why you not stay with me tonight—in my cave.’ He seemed nice and we, two girl friends, were looking for adventure.” Thus begins the story of how Marguerite van Geldermalsen, a nurse, became the wife of Mohammad Abdallah Othman, a Bedouin souvenir-seller of the Manaja tribe. She shared her life with him and their children in a community of about a hundred families in the ancient caves of Petra in Jordan. It was 1978 when Marguerite and her friend traveled through the Middle East and met the charismatic Mohammad. She decided that he was the man for her. Their home was a 2,000 year-old cave carved into the red rock of a hillside. She became the resident nurse and learned to live like the Bedouin — cooking over fires, hauling water on donkeys, and drinking sweet black tea. Over the years she became as much of a curiosity as the cave-dwellers to tourists, even hosting the queen of England at one occasion. This is her extraordinary story, well told and fascinating to read.