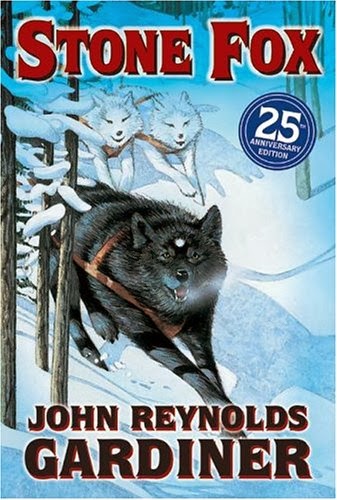 This book is a classic by now. How did such a thin little book become both a classic bestseller as well as a major motion picture?
Because it is a good story! A heart string pulling, tear jerking good tale.

Little Willy’s grandfather is sick, and it’s up to Willy to save their farm from tax collectors. Their only hope is the prize money from the National Dogsled Race. But a lot of other people want to win the race, too, including Stone Fox, who has never lost a race in his life.
Do Willy and his dog Searchlight stand a chance against the toughest racers around? Can they win the race to save the farm — and Grandfather — before it’s too late?

I was lucky to have met the author, John Gardiner. He seemed a very kind man and was supportive of me as a fellow writer. We had a great chat about the struggles of writing, editing and rewriting. He showed me his first original manuscript. The paper was covered in red. It seems that every single word of it had been crossed out and edited. “I am dyslexic. I couldn’t write at all…”, he said.
I was in awe that his story had gone on to do so well.

Then, to my utter surprise, a few weeks later I received the Dutch version of Stone Fox in the mail. “I can’t read it anyway so you enjoy!” he said.
And enjoy Stone Fox I have! A book that every teacher and parent should read aloud with their children.