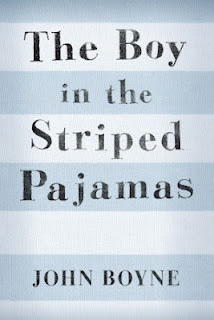 This small novel touched me more than perhaps any other book I can think of. Wow. It grabbed me and took me for a spin. I don’t particularly enjoy wartime stories. Having grown up in Europe shortly after the war, I grew up on plenty stories from my parents. Horrible but fascinating stories. I read Anne Frank’s Diary as a kid, of course. I knew that this little book was a story about that same war. When I first picked it up, I was in awe of the voice and the setting. How daring to place an innocent child in Auschwitz. Not inside the concentration camp but on the other side of the fence. Bruno’s father has received a promotion, as director of the camp, and the family must move from their home to a new house far far away, where there is no one to play with and nothing to do. A tall fence running alongside stretches as far as the eye can see and cuts him off from the strange people he can see in the distance. Bruno longs to be an explorer and decides that there must be more to this desolate new place than meets the eye. While exploring his new environment, he meets another boy whose life and circumstances are very different to his own, and their meeting results in a friendship that has devastating consequences. I loved the gentle voice of the book which is in such huge contrast to the horrific setting. While reading, I was constantly aware of the background knowledge I brought to this book as a reader and thought what an interesting read and discussion this book would make for a Grade 12 class! I did not see the end coming (a tribute to the author’s skill of masterful storytelling). I hit me between the eyes and left me reeling for a long time. Which is why I picked this book to be on my bucket list. A powerful tale for older teens and adults.