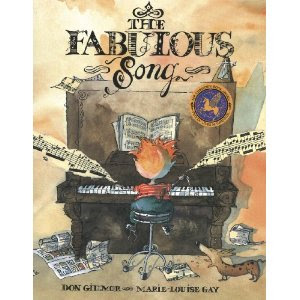 The Fabulous Song, Don Gillmor
The next installment in my ‘Bucket Book List” is a picture book that I just love. Not being terribly musical, I was given the only speaking part in a musical when I was a child. Maybe that’s why this story really appeals to me.

Sarah Pipkin’s little brother is named Frederic, after Chopin, and his parents are sure he will be musical. But Mr. Stricter, the piano teacher, and Mrs. Lumply, the clarinet teacher, can’t do a thing with him. Even leaving his clarinet on the bus doesn’t save Frederic from subsequent trials with an oboe, a violin, and a banjo. However, when Frederic attends Sarah’s youth orchestra concert, the conductor captures his fancy. When the house fills with relatives for his seventh birthday party, Frederic makes music by conducting them all in a song he hears in his head. The illustrations, with their exaggerated figures, limpid watercolors, and nervous line, are full of great touches: Mr. Stricter’s dog barks allegro vivace; Mrs. Lumply’s pets wear earplugs and earmuffs when carroty-haired Frederic plays; the conductor, and later Frederic himself, produce great ribbons of musical notation that reach out to touch the audience. (Picture book. 5-8)