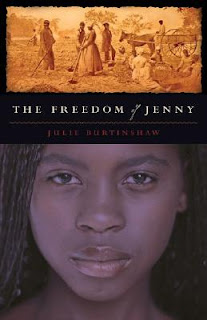 The Freedom of Jenny by Julie Burtinshaw

When I first read this book, I was entralled. Not only by the story of an African American family who buy their own freedom and travel west on the pioneer trail. But specifically by the fact that Jenny ultimately settles on the Gulf Island where I now live.

Jenny Estes shares her father’s dream of freedom. But for Jenny, who was born into slavery in Missouri in the 1840’s, freedom seems an impossible dream. She toils alongside her mother in the steaming kitchen of the Leopold plantation, trying her best to be humble and obedient so that Mrs. Leopold won’t sell her to a slave-trader. But when she’s not drying dishes or mixing biscuits, Jenny finds time to practice her reading, a skill that ultimately helps the family plan their migration and realize their dream.

The Estes family faces a formidable journey: a grueling passage from Missouri to Saltspring Island, Canada. Along the way, Jenny’s family faces scarlet fever, racial persecution, the arduous Oregon Trail, warring native Haidas, and finally, the challenges of homesteading. Jenny’s spirit and fortitude in the face of many adversities make her a heroine all young readers can look up to.

Based on a true story, this tale is a gripping account of one young girl’s coming-of-age in troubling and unsettling times.
Once I moved to Salt Spring Island, I saw historical photos of the family on which this story is based. I have met their ancestors. I am fascinated by this well written book and a history so close to home.