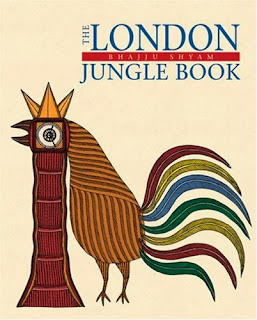 The London Jungle Book by Bhajju Shyam
I felt very lucky when I ‘discovered’ this unique book, several years ago. It’s one of those gorgeous books, and story, that makes a fascinating read for adults, a coffeetable art book AND a children’s book.
“A beautiful book. I would like to give it to everyone I love when they are traveling by choice or necessity.”—John Berger

“Bhajju Shyam is causing quite a stir among museum-goers in London. . . . This is London as you’ve never seen it before. An incredible vision.”—BBC World Service

This stunning visual travelogue by an Indian tribal artist turns a modern metropolis into an exotic bestiary. Bhajju Shyam, from the Gond tribe in central India, had never left his native village when a European visitor encountered his art and invited him to London to paint the interiors of a chic Indian restaurant.
With radical innocence and great sophistication, Bhajju records his experiences and observations showing a modern city as you’ve never seen it before, combining his vision with native lore — the London Underground becomes a giant earthworm, Big Ben merges with a massive rooster, and English people are shown as bats that come out to play at night. It is rare to encounter a truly original vision that is capable of startling us into reexamining familiar sights. By breathing the ancient spirit of wonder back into the act of travel, The London Jungle Book does just that. Bhajju’s work is well known throughout India and has been exhibited in the United Kingdom, Germany, Holland, and Russia. From the walls of his tribal village home to international acclaim, Bhajju’s has been an incredible creative journey.

Check out what Delhi street children did with art based on this book:
http://www.youtube.com/watch?v=Y5Np1dyG_o8