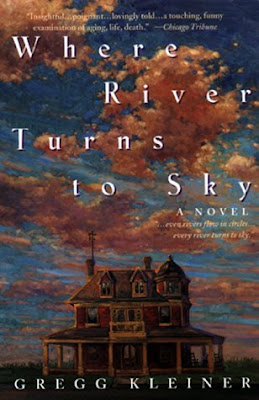 Where River Turns to Sky, a novel by Gregg Kleiner, HarperCollins

Weaving a tale of immense power in his magical voice, Kleiner tells the story of a man determined to realize an improbable dream after the death of his best friend. Eighty-year-old George Castor promised he would never let his best friend Ralph die alone at the Silver Gardens Nursing Home — but Ralph passed on while George was away fishing. Distraught, guilt-stricken and seeking redemption, George buys a broken-down mansion in  Oregon, paints it fire-engine red, and begins searching for other old folks to share it with him. Because George has made a new promise that will alter the course of the rest of his life. And, with the help of a miraculous old woman named Grace, he assembles a ragtag bunch of aging strangers, determined to make their last days on earth–and his own–an adventure.

I discovered this book while living in Oregon and enjoyed the humor. A great read if you need a relaxing summer book. Would make a fun movie, too!